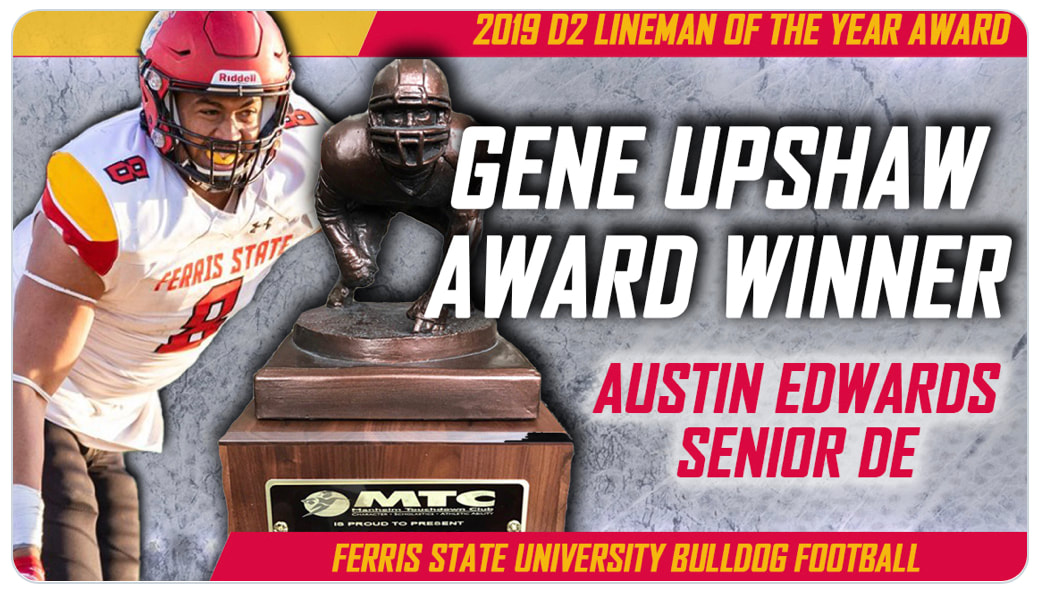 The Upshaw Award is presented annually to the top NCAA Division II senior offensive or defensive lineman in the nation. Sports information directors from the football-playing Division II institutions comprise the voters.

As a recipient of the Gene Upshaw Award, Edwards receives a trophy in the likeness of Upshaw and recognition at the Manheim Touchdown Club’s annual banquet in May. Jones also receives an automatic invitation to participate in the East/West Shrine Game.

Edwards became the first defensive player to win the Great Lakes Intercollegiate Athletic Conference (GLIAC) Player of the Year Award since 2005 after leading the Bulldogs to an undefeated regular season, a second consecutive GLIAC Championship and a No. 2 ranking nationally. He followed up an All-America-caliber season in 2018 with his third All-GLIAC First Team selection. Anchoring one of the stingiest defenses in Division II, Edwards enters the NCAA Quarterfinals with 49 tackles, 8 1/2 sacks and 14 tackles for loss. Through 11 games, the Bulldogs’ defense ranks eighth nationally in total defense, first in third down conversion defense and third in scoring defense.

“We had a group of extremely talented finalists this year,” said Hess. “Austin’s production and dominance for a winning program like Ferris State clearly set him apart to the voters. We congratulate Austin and wish him the best of luck in the NCAA playoffs and as he pursues the next level of football.”

“The only thing that exceed’s Austin’s performance of the field is his attitude off of it--that includes his work ethic and humility,” said Ferris State Head Coach Tony Annese. “He cares about every one of his teammates. Austin has been such a great leader on our defensive line and his development over the past four years has played a key role in our continued and sustained success. He’s a dominating player at the line of scrimmage and really has played a big role in the success of our defense this year. We’re fortunate to have not only a great player, but such a great person as one of our team captains and leaders.”

Edwards is the 16th recipient of the award named in honor of former Texas A&I (now Texas A&M Kingsville) University and NFL All-Pro offensive lineman Gene Upshaw. Upshaw, a 1987 inductee into the Pro Football Hall of Fame, served 25 years as the executive director of the NFL Players Association until his death in 2008.

Picture of Austin Edwards, the 2019 MTC Gene Upshaw Award recipient, at the 2020 East West Shrine Game in St. Petersburg Florida. Edwards played at Ferris State.  He is a defensive end. He is pictured with Zach Hess and Mike Williams.